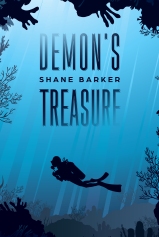 e a lot of talks, and one of my favorite bits is a comedy routine about scuba diving with sharks and manta rays. Even though “Demon’s Treasure” is a taut, young-adult thriller, a few jokes from my routine slipped in. The other day I received a note from a young reader who’s heard me speak; he laughed out loud when he remembered the jokes in the book from my talk.

. . . Nick also explained that sharks were known to bite into a person and then, not liking the taste, spit them back out again.

“So even if one does sink his teeth into you, it doesn’t mean he’s going to finish the job.”

“Yeah,” Jansen replied, “but you’ll still be full of holes.”

Without missing a beat, Nick said, “But that’d be awesome!”

“Well, if that happened to me, I’d just plug my nose and blow real hard and the air would come whooshing out of all those little holes. Voila! Human Jacuzzi!”

View all posts by shanebarkerbooks